Something is cooking between Ajay and Gunjan 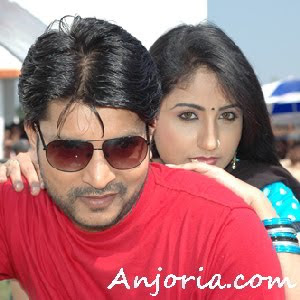 here is something cooking between Ajay Dixit and Gunjan Kapoor these days. It became evident when Gunjan Kapoor praised Ajay Dixit in front of the whole unit. This is against her known nature. Without taking it far let us explain that these two stars are the romantic lead pair of Braj Bhushan directed Bhojpuri film “Papi Ke Pap Kahe Ganga Dhoye”. Ajay started his career with the superhit film “Betwa Bahubali”. The chemistry between Ajay Dixit and Gunjan Kapoor so good thatthe scenes were shot rapidly. The unit thought that they are witnessing a real life romance !

This star pair, Ajay Dixit and Gunjan Kapoor, are also in two more films directed by Braj Bhushan, One of these films is “Chora Shahar Ke Sapan Sunahara” which is going for a start to finish shooting schedule very soon. The director too feels that this pair match lovingly on the screen. Good luck to this lucky pair !