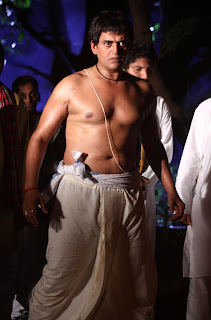 After receiving a whole lot of accolades and laurels for his award winning film, PINJAR, based on famous writer Amrita Pritam's bestseller, Dr. Chandraprakash Dwivedi disappeared from Bollywood scene. For around four years he was busy with television and writing the screenplay for his upcoming project. But the good news is that he is back with another project based yet again on a book.The book, KASHI KA ASSI, by eminent Hindi writer Kashinath Singh is a satire and Dr. Dwivedi confirms that stars like Sunny Deol, Ravi Kishan, Nikhil Dwivedi, Mukesh Tiwari and Saurabh Shukla as also many stars from the theaters too have been signed to play important leads in the project.
Dr. Dwivedi also disclosed that he would start shooting soon and half the movie would be shot in Mumbai and rest in Banaras. He also accepted that it would be a challenge shooting in Banaras especially amidst the rush and crowd at the 'ghats', but added that it is absolutely essential to shoot KASHI KA ASSI there as the soul of the film lies in Banaras, which is also the main backdrop of the plot.
Posted by live Manoranjan at 7:28:00 PM