Bhojpuri films muhurt from there. Ravi Kishan has anchored for a month at the 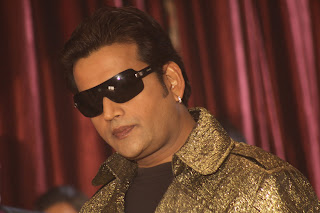 Surve Farm House nearly hundredkilometers from Mumbai. He was there for the shooting of “Faulad” produced by Rajnish Gupta and directed by Firoz Khan. The location appealed so much so that Ravi Kishan decided to stay put there and decided to complete his shootings for his delayed films. This “Santan” directed by Harry Fernandes, “Mallyuddha”, “Sadak” and other films were shot there. Muhurt of two of his new films were also done there. These films are “Tahalka” directed by Anand Gahatraj and produced by Bittu Singh-Gopi Yadav, and a film, yet to be named, by Rajnish Gupta, the producer of “Faulad” .

This was facilitated by the fact that the children are having their vacation and the family of Ravi Kishan is enjoying their stay togather. Ravi Kishan says it is like vacation for him. However this decision has helped the producers a lot.